EX-MINISTER LINKED TO THE SIX-YEAR-OLD CASE 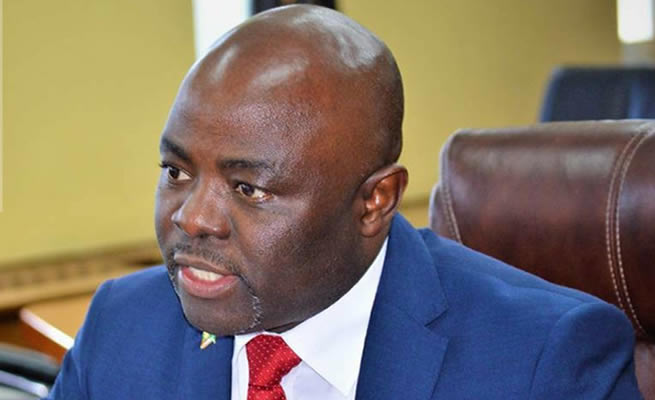 Zambia police say former Home Affairs Minister Stephen Kampyongo has been detained for his role in the helicopter attack at Kalalantekwe school grounds in Shiwangandu in Muchinga Province which happened six years ago. Spokesperson Ray Hamoonga said in a statement on Wednesday police warned and cautioned the former Minister who is yet to be charged for endangering the safety of the aircraft and its passengers on board.

Mr Kampyongo, the once powerful Minister was in the early hours of Thursday morning taken to Chinsali, the provincial capital of Muchinga where he will be charged, his lawyers have confirmed.

The Commission of Inquiry into voting patterns and electoral violence recommended that thorough investigations to be conducted “to ascertain the actual number of instigators and perpetrators of the 2015 and 2016 Shiwang‘andu incidents”.

At the Commission‘s special sitting, on the 06 December, 2018, in Kafue district, former Minister Kampyongo said the allegation that he was one of the instigators of the violence in the helicopter incident were “false” and “a misrepresentation of the truth”. He said on the day of the attack, he was on a campaign in Chief Chibesakunda‘s area, about 65 kilometres away from the place of the attack.

The Commission heard testimonies from several people who appeared before it. In Lusaka, Patrick Mucheleka, the United Party for National Development (UPND) deputy general secretary, narrated that on 01 January, 2015 the UPND campaign team flew into Shiwang‘andu district in a helicopter, intending to hold a political rally at Kalalantekwe Primary School grounds. This was during the election campaigns prior to the 2015 Presidential by-election won by Edgar Lungu.

He said the UPND campaign team comprised Mutale Nalumango (now vice president), former first lady Maureen Mwanawasa, Felix Mutati and Mr Mucheleka himself. He said the UPND had secured a police permit to hold the rally and that their supporters gathered at Kalalantekwe Primary School grounds.

“I was personally able to see Hon. Kampyongo in a GRZ (Government of the Republic of Zambia) Pajero (vehicle) from a distance watching and giving instructions … with my two eyes...,” he said. “The matter was reported at Shiwang‟andu district police station and no single culprit was arrested; the local people gave names of those who were responsible.”

Mr Mucheleka further said he had video footage of the whole incident in his possession and would avail it to the Commission.

According to the Commission, the video footage linked to the 2015 helicopter incident was viewed and it was observed that there were a lot of people dressed in the Patriotic Front (PF) and the UPND party regalia within the vicinity of Kalalantekwe School. They also confirmed seeing the UPND team in the footage led by Mrs Nalumango, and heard them lament over the violent conduct of PF cadres. However, contrary to Mr Mucheleka‘s submission, Mr Kampyongo was not seen in the footage, the Commission said.

The Commission Sitting in Shiwang’andu

During a public sitting in Shiwang‘andu district, Felix Chabatama, a petitioner submitted that during the 2015 Presidential by-election campaign period, he was among the UPND supporters who were waiting to be addressed by their party leaders at Kalalantekwe school grounds. He said he was standing near a goalpost when he saw the then Shiwang‘andu District Commissioner,  and PF cadres, coming from the direction of Mukwikile Village, in a GRZ vehicle that was being driven by Stephen Kampyongo.

“Next I saw the younger brother to Hon. Kampyongo, Andrew Kampyongo, driving a Land Cruiser with four doors, speeding to where we were,” said Mr Chabatama.

Mr Chabatama further submitted that he fell, and Andrew drove over his left hand and then sped off towards the helicopter but fortunately it flew away before he could get there.

Another petitioner at the Shiwang‘andu public sitting, Maureen Bwembya, submitted that there was another helicopter incident in the district on the 13 June, 2016. This one was carrying the UPND leader, Hakainde Hichilema, and other party officials. She submitted that the helicopter was prevented from landing by PF cadres who lit fire on the Kalalantekwe grounds.

At the same sitting in Shiwang‘andu, the then DC Ms Evelyn Kangwa appeared before the Commission and confirmed the two separate helicopter incidents in Shiwang‘andu, in 2015 and 2016. However, she denied being involved in the 2015 incident and submitted that she was not even a DC for Shiwang‘andu at that time.

For the 2016 incident she said: “I denied permission to the police... I refused as DC... what I know is that a chopper (helicopter) can land anywhere, on a pipeline or even on a roof or a toilet. She also said she was following guidelines of the PF as it was the party policy not to disturb the pupils in class.

On the allegation that a Landcruiser prevented the helicopter from landing, Ms Kangwa confirmed the incident but said it didn't disturb the helicopter.

“I don’t know who was driving the Landcruiser, but I suspect it was a UPND person. People say it was Andrew Kampyongo, but I know..., he also has a Landcruiser, but he was not the one driving..., I was with him in Chinsali when all that was happening,” she said.

The Commission observed that from the submissions by Ms Bwembya and Ms Kangwa (DC), it is very clear that there were two separate helicopter incidents in Shiwang‘andu and that recollections of what exactly transpired could have been impaired due to passage of time.

The Commission also observed that Ms Kangwa, as DC did not have the authority to grant permission for the helicopter to land at the school ground and the UPND indicated that they had obtained the necessary permit from Department of Civil Aviation (now CAA), which was the appropriate authority. The Commission further observed that in the 2015 helicopter incident it was difficult to conclude that Mr Kampyongo was the instigator of the violence. as alleged by the UPND.

The Commission made three recommendations, including the need for the case of Andrew Kampyongo‘s involvement in the 2015 and 2016 helicopter incidents to be reopened. It also recommended that the DC for Shiwang‘andu, Ms Kangwa, should be censured and appropriate sanctions against her be taken by the appointing authority.